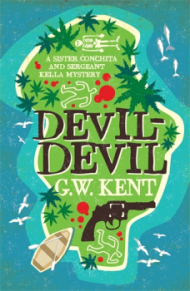 This week, I’ve been even further afield, to the Solomon Islands with G.W. Kent’s Devil-Devil. It’s set in the 1960s, before Independence, and Sergeant Ben Kella has been called on to investigate the death of an islander on his home island of Malaita. At the same time, a schoolboy has disappeared from the local mission school. Sister Conchita, who has recently arrived, becomes involved, but is also at odds with Sergeant Kella, who follows the traditional religion of the islands, and has the hereditary role of peace-maker.

It’s a complex plot, with disreputable ex-pats, mafia-like Chinese business-men, and traditional rivalries between the bush (inland) villages and the saltwater villages, as well as more recent rivalries dating back to the Japanese invasion in the 1940s and the battle of Guadalcanal – my history is rusty, but I recognised that name at least. There are also times when a glossary might have been helpful (I discovered via Wikipedia that a lap-lap is a waist-cloth, i.e. two flaps of material and some string to hold them in place), but this first novel in a series sets the scene admirably for a place that I’m guessing is outside most people’s experience. It has something in common with Tony Hillerman’s tales of the American southwest. The author lived in the Solomon Islands (south of Papua New Guinea) for eight years, working in education. This was an enjoyable and instructive introduction to the Sergeant Kella and Sister Conchita mysteries, and I hope to read more.