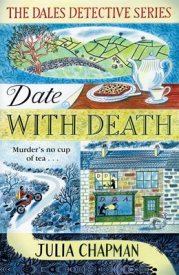 Julia Chapman’s Date with Death is the first in a series set in the Yorkshire Dales, in the fictional village/small town of Bruncliffe. Delia Metcalfe, recently divorced, is struggling to make ends meet with her dating business, and has rented out part of her building to an unknown stranger – who turns out to be the black sheep of the village, Samson O’Brien, who has returned to the Dales after a career in the police. No one is glad to see him return, except perhaps his feckless ex-alcoholic father, now in an old people’s home.

When one of Delia’s friends is found dead, the grieving widow asks Samson to investigate. However, more men in the area are winding up dead, and the one thing they had in common was attendance at one of Delia’s speed-dating events. Delia and Samson are forced to join up in order to catch the killer, despite their differences.

This is obviously intended to be the first in a series, with hints thrown out about Samson’s previous career that are never resolved (pet hate of mine). I also struggled to differentiate between some of the characters. That aside, Chapman has an engaging style of writing, and although the Cathy/Heathcliff sparring between the fell-running Delia and the darkly brooding Samson may pall without strong plotlines, this was a creditable first outing.

This week it’s been a visit to one of my favourite authors, Robert Barnard, and A Fall from Grace. It’s set in the fictional Yorkshire town of Slepton, where “Charlie” Peace and his wife have just bought a new house, with financing from his father-in-law, who moves in just up the road. It’s only later that Charlie thinks to enquire why his father-in-law, Rupert, was so keen to move away from Devon. Perhaps it has something to do with his penchant for finding and exploiting women to do his housework? Or is there something more sinister afoot?

Barnard breaks every “rule” of modern crime writing – the murder happens late in the book, there are few cliff-hangers, few suspects, and yet his work draws you in and pulls you along like a toy train on little rubber wheels. Charlie is an amiable character, as is his wife Felicity, currently expecting the Foetus, whose sex has yet to be revealed, and their attempts to settle into a new home ring true. The other characters are largely sympathetic, though the book has reminded me once again why I would never want to teach teenagers, or run for Mayor (amongst the many things I wouldn’t want to do. Instead of a bucket list, I have a list of things I intend never to do. It’s going really well so far.)

Perhaps not one of Barnard’s strongest plots, but even a mid-range Barnard is highly enjoyable, and well-suited to the particularly dank summer that’s currently hovering over us.

This week has seen the demise of writer Nicholas Rhea, aka Peter Walker, who wrote the books that formed the basis for the long-running Sunday night TV serial Heartbeat. Set on the North Yorkshire Moors in the 1960s, it was a nostalgic look at a bygone era of policing and community service that lasted for a generation (18 series). In addition to writing over 130 books, Walker was also a prolific columnist, and had a weekly page in my local paper (the Ryedale Gazette and Herald), which was syndicated widely . He was born and brought up on the moors, and had an unrivalled knowledge of their history and folk customs, as well as bringing a detailed perspective on natural history. Locally, he is simply irreplaceable.

He was also a long-serving member of the CWA, and the interweb is full of warm memories of him. Other tributes here and here.

I know it’s almost Easter, but I’ve been reading “Another Little Christmas Murder” by Lorna Nicholl Morgan. It was originally published in 1947, but was revived last Christmas with a suitably ornamental cover. A young career woman, Dilys Hughes, is driving across the Yorkshire Dales in a snowstorm, when she comes off the road at a dangerous spot. Another motorist, Inigo Brown, stops and offers to take her to his uncle’s house, Wintry Wold, for the night. ( I know the roads north of Reeth, and they’re not a good place to be stuck in your car, but Wintry Wold? Too southern, too twee.)

On arrival, though, the much-younger and recently married Aunt Theresa, an annoyingly teeny and delicate woman (I’m guessing the author was taller), is not pleased to see them, and prevents Inigo from seeing his uncle. As the snow builds up, it traps more and more people at the house, and when murder is done, everyone is under suspicion. Morgan has a comic touch, but is adept at ratcheting up the tension as people die or disappear.

This is a classic country house mystery, minus the aristocracy; the servants have at least as much a role to play as the owners of the house, although it can be hard to distinguish between them – I found myself leafing back on several occasions. It’s a light and enjoyable read, and I’m glad it was rescued from the snowdrift of obscurity.

Speaking of snow, guess what’s due tonight? This book is probably more appropriate than anything featuring poisoned Easter eggs or homicidal bunnies. (Not that I could find any. Big gap in my collection. The nearest was Louise Penny’s “The Cruellest Month”, meaning April.( If T.S. Eliot had lived in the north, he’d wouldn’t have seen lilacs until May, and there goes the whole poem.) Or G M Malliet’s “Pagan Spring”. I’ll be having my own Easter egg hunt for springlike mystery novels.)